evening lengthens inside the narrowboat the tap of a hammer

cool breeze ... that faded postcard pinned to the wall

slowly as the turbine turns dusk

fallen leaves the tang of cigarette smoke in cold air

away from the edge

By Seven Firs and Goldenstone they went, to Stormy Point and Saddlebole.

Let’s start, rather, at the farmhouse: for who would invite in the unwelcome?

And there they wait.

From the valley where foxes play in the snow they went, straggling across open moor to the summit's flat ridge and then down, down through a murder of crows, down, down to a gritstone pillar in a stand of beech trees.

Away to the South a black cloud rolled. 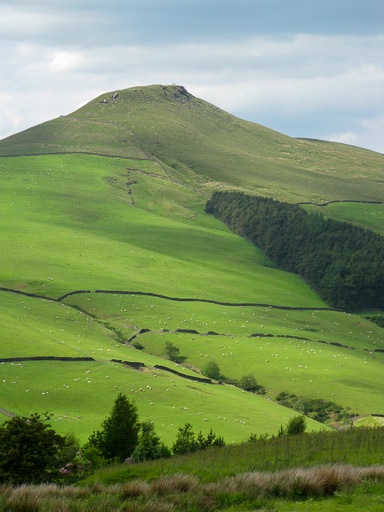 Watch: Alan Garner on the Legend of Alderley

but are they all horrid

Our first trip to Bath was when my father took us all there for the weekend. We stayed at The Francis, whose corridors Deborah roamed on new rollerskates – no trike, no twins, no “redrum”.

My mother’s strict itinerary was built around breakfast, morning coffee, lunch, afternoon tea, and dinner. From the moment she sat down at dinner, she’d never relax until she’d seen the sweet trolley and made her choice. Anne couldn’t decide what to have: the waiter gave her small portions of three desserts.  I don’t think mum ever got over it.

Within that itinerary, there was little room to see or be seen, to squeeze in any sightseeing: a walk past the Assembly Rooms, a sidelong glance at the Pump Room, a brief peek at the Baths.

It was only later, on our own visits, that we discovered just how much remained: the bath complex itself, the temple of Sulis Minerva, the sacred spring with its votive offerings and its curses. 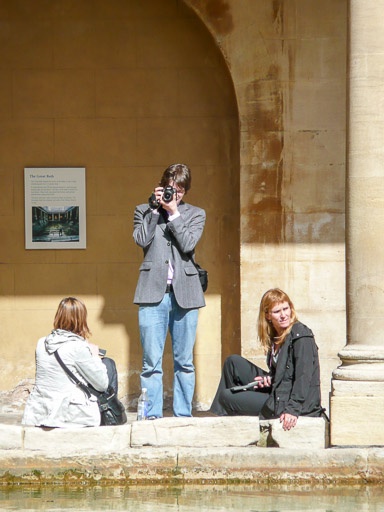 what charlotte means to me

Every Saturday morning we’d go to the red brick building that housed the local library. I’d borrow as many books as I could, and read them over the weekend. Often there’d be some Gollancz Science Fiction, whose bright yellow jackets were easy to spot on the shelves. I soon learned that SF really stood for Speculative Fiction, a new world entirely.

A small breakfast-room adjoined the drawing-room. I slipped in there. It contained a book-case: I soon possessed myself of a volume …. I mounted into the window-seat: gathering up my feet, I sat cross-legged, like a Turk; and, having drawn the red moreen curtain nearly close, I was shrined in double retirement.

Years later, stretched out on the sofa reading, I thought back to those earlier days. Sometimes rather than sitting, I’d read kneeling on the floor, the book propped up on the armchair in my place. Once I knelt on a bee.

Prejudice too can be transient. 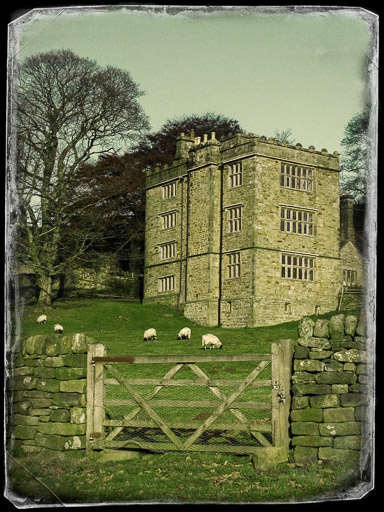 My grandmother died when she was 82 from cancer of the liver.

“We knew she was ill, licking her lips as she ate a peach.”

“What are you doing here?” “I just came to see you, granny.”

The night before she died, she turned to face the wall; I think she knew.

It was my first adult death.

As kids, we stayed with her in Plymouth every summer. Playing in the park at the bottom of the road, or in the small woods beyond, building dams in its tiny stream; spending days on the the beach, despite the cold and the wind; taking mystery tours by coach over Dartmoor, always ending up at places we knew.

One day my mother drove us all to Clovelly. My uncle, on crutches (leg broken in a motorbike accident), raced us down the steps. Climbing back up, I stood in tears outside the gift shop, wanting a little brass figure in the window. Her first grandchild, she was always indulgent.

summer breeze a little brass donkey clutched in my hand

Talking to my uncle in the pub after the funeral, I found myself saying “your mother”. Trying to distance myself … 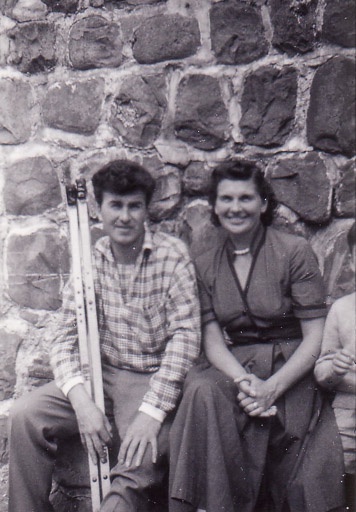 One lost, one found, one buried in the ground …

The pandemic has blown our plans for a family holiday in Tuscany, so we’re staying on the Suffolk coast. The holiday home we’ve rented is right on the front, on Crabbe Street.

Sam and Deborah go for a swim before breakfast, across the road, over the pebbles; then back, still dripping, north sea cold. I go out too, but only to take photos, crunching along the shingle beach that stretches out to the Martello tower in the distance.

A lonely place for a death.

Later, we all walk to Thorpness. On the way out, we stop at the Scallop: “I hear those voices that will not be drowned”, a line from the opera (if not The Borough). On the way back, we find ourselves passing through the churchyard, as did Paxton and the others in very different circumstances.

Just down from the church is Wyndham House, where James would holiday with his grandmother. Behind high walls and wooden gates, it’s another holiday let now, which sleeps 13. 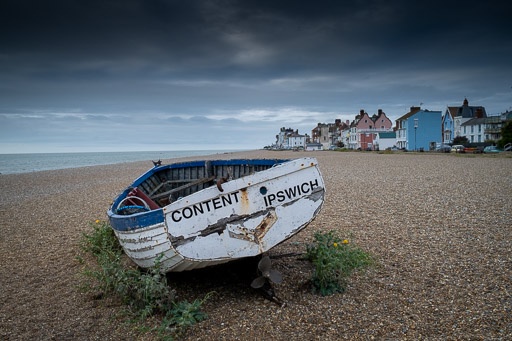 out on the moor

Did I think to take walking boots, something to eat, coffee, more than just a crude sketch map? Too long ago to remember … and now, it’s not the cry of the wind or a rattling window frame that haunts me, but those pale shapes in the mist.

woolgathering … indifferent sheep  out on the moor 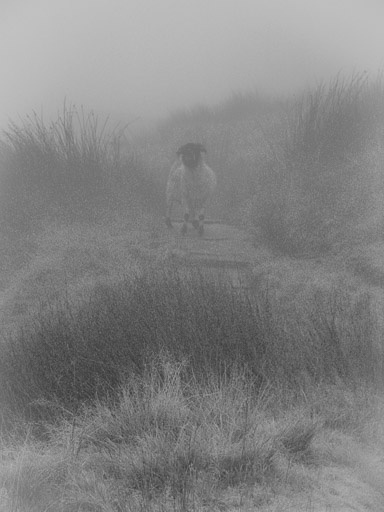